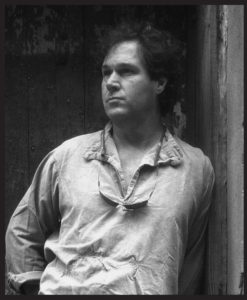 Scott Vaughn Owen grew up in the small charming town of Columbiana, Alabama, where he was raised in an encouraging environment of family and peers to peruse his true desires and talents as an artist.A small southern town located centrally in Alabama did not offer much in the way of art education. Although, Scott’s mother, Betty Sue, always encouraged her son to pursue his talent, providing him art supplies at birthdays and Christmas. All the while, Scott’s father, Frank, intended for his three sons to learn to work! This combination of encouragement and a strong work ethic fed the artist that Scott is today.

While pursuing fine art at the University of Montevallo, Scott began an apprenticeship to a sign maker in nearby Birmingham, Alabama. This led Scott to seeking out the finest sign artisans in the country and learning all there was to know about the art of sign making from the communicative arts, typography and composition to the art of gold leaf, glass etching and wood carving. He followed well known craftsman across the country seeking knowledge and developing skills as well his own personal style. His work has led to articles in international publications and numerous awards.

After many years and success as a sign artist…new technologies and customer expectations began to leave him un-inspired. In 2009, he picked up a brush, paint and canvas and found the freedom he craved!

Scott is remarkably prolific, sometimes creating many small pieces of art in a day. His talent is pure, but his work ethic makes him stand out working tirelessly on his style and techniques. His bold use of line and powerful negative space combined with bold color choices creates works that rival mid-century expressionist such as Jackson Pollock and Mark Rothko. His works have the ability to transform line into recognizable shapes, although vey abstract, much like Picasso accomplished in his later years. Scott can appear to “make it look easy” but it’s the combination of years of design and engineering one of a kind commercial pieces that make it work.

Scott may have shown up late to the art world but he brings all the equipment and knows how to use it. “I love working on something without knowing the outcome. I sometimes bring a drawing or an idea to the piece I am working on and it may begin there, but it never ends there… I see the ‘holes’ in the piece as the process progresses. I work with it until they are part of the painting or I have given them new meaning.”

This is not an artist who ‘thoughtfully’ sits and paints. Scott builds and stretches his own canvas. He paints publicly with local bands, creating stunning large works of art in front of a live audience in just hours. He is a physical man, whose time away from his studio is spent with his wife working on their farm. His hands are strong and rough like a carpenter’s hand. His work is also full of physical energy. He often paints in the floor, attacking each piece from different angles, always looking for the next visual opponent. Even some of his drawings are executed while standing engaging the use of his whole body. On a whim, Scott will grab Stir sticks, pieces of cardboard and plastic – just about anything to manipulate the medium. He loves using spray paint with a commercial sprayer to apply paint then whimsically working over his canvas with smaller tools to create line and form. He has pioneered his own exciting approaches to creating art through use of tools.

Much like his design career, Scott’s passion and skill for fine art has taken off. His work is in collections from Bakersfield to Boston, shown in numerous juried shows, winning awards, but most of all, feeding his passion for art.

I never stop exploring … It is in the evolution of the work where it happens for me. The process is physical and emotional. My tools are all around me. I take a trip to a destination unknown. I let go and create…!
Enjoy my work, and my journey as a contemporary artist.